Why Margraten became the location of the American cemetery?

In October 1944 captian Joseph Shoman of the 611th Graves Registration Company (GRC) visited the town hall of Margraten. He had been ordered to look for a suitable plot of land for a cemetery for the Ninth Army. The Ninth Army, made up of some 250,000 troops, was to carry out major attacks on the Ruhr and Rhine for the allied forces and to start the advance on Berlin. It was expected that many soldiers would be killed. At first there were plans to construct a cemetery in Sittard or in Berg en Terblijt but in the end Margraten was chosen as a suitable location. Thirty hectares (some fifty football fields) were turned into a cemetery.

On D-Day, June 6th 1944, the operation 'Overlord' was launched, the landing of the allied troops on the coasts of Normandy. For weeks on end, troops and material had been brought ashore. Despite this, the allied troops did not break the German defence lines until mid August, but after that they were not to be stopped. The troops marched trough France forcing the Germans into a chaotic fight. Paris was liberated on August 25th and Brussels on September 3rd 1944.

The liberation of South Limburg

On September 12th at 10:00 a.m. the troops of the first battalion of the 117th regiment of the American 30th Infantry Devision (Old hickory) crossed the Belgian-Dutch border at Voeren. Mesch, a village situated in the community of Eijsden, had the honour to be the first village to be liberated and hance was given a place in the history books. Maastricht was the first Dutch city to be liberated, on September 14th 1944. Just north of Sittard, the allied advance came to a standstill on september 18th due to numerous causes. On October 5th, Kerkrade was the last town in South Limburg to be liberated that year. It seemed only a matter of weekes before the rest of The Netherlands would be liberated. However, the largest airborne opertation in history, known by the code name 'Market Garden' - an attempt to conquer the bridges across the Rhine - failed miserably. The bridge across the Rhine in Arnhem remained in German hands. The Dutch provinces north of the rivers Rhine and Meuse and large parts of north and central Limburg remained occupied.

North and Central Limburg in the front line

The front line in North and central Limburg ran from Sittard in a northern direction towards Nijmegen. In many places, battles were fought over every single house. The Germans only withdrew when all the tall buildings, such as churches and mills, which could serve as observation points, had been destroyed. A large number of inhabitants in the front line areas were evacuated and could often only return to their damaged homes many months later. The battle focussed on two areas: north and central Limburg west of the river Meuse and the area between the Meuse and Ruhr, known as the 'Ruhr triangle'

The Britisch troops liberated Venray in the northern part of Limburg on October 17th. But it came at a price - the entire city centre was destroyed. During that battle, an estimated 30,000 people were evacuated from the war zone to North Brabant and Belgium. It was not until January 8th 1945 that the occupying troops were definite driven away from the area situated to the west of the river Meuse.

While the battle in the north and central part of the province still continued unabatedly, the population in the liberated southern part of Limburg were terror stricken. On December 16th 1944, the Germans launched a large-scale offensive in the Ardennes that had a weak defence structure. The aim was to seize the Meuse area, the American supply depot in Liège and eventually the port of Antwerp. South Limburg was panicking. The German attack seemed to be successful and the population of the liberated part of South Limburg were extremely anxious about the possible return of the ousted occupying forces. The anxiety was justified. Members of the Gestapo and SD (Security Service) came along with the attacking troops that were entering Belgium and Luxembourg. They rounded up former members of the resistance movement and shot them on the spot. Hunderds of civilians were executed. It was not until the second week of January 1945 that the allied forces finaly succeded in pushing back the Germans. 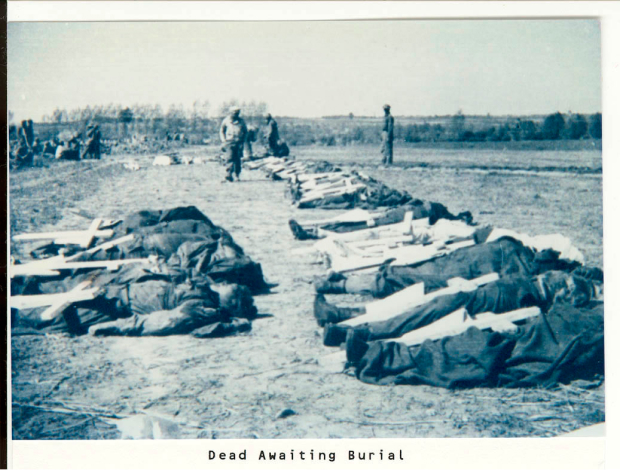